CAD will go up according JPMorgan - Rate increase 0.25-0.5 is expected

“Based on rhetoric from the Bank of Canada in December, it was clear that labour market dynamics and outperforming economic data had created heightened concerns at the Bank that the output gap was closing more rapidly than expected,” wrote Silvana Dimino, a New York-based economist at J.P. Morgan, in a report to clients Tuesday

Dimino sees the Bank raising its benchmark rate by 25 basis points to 0.5 per cent in January; her team previously called for the first move in April. She expects there will be five rate hikes this year, which would push the benchmark rate to 1.5 per cent by year-end.

She also expects the Bank to begin a modest run off of its balance sheet in the second half of this year.

As of mid-day Wednesday, overnight index swaps pegged the probability of a January rate hike in Canada at 46 per cent.

In October, Bank of Canada Governor Tiff Macklem indicated he would not tighten policy until the economic recovery was complete – something he expected to happen in the “middle quarters” of this year. But data since then suggest the economy has been outperforming.

The BoC leaves its Overnight Rate unchanged at 0.25% as expected 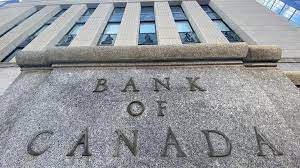